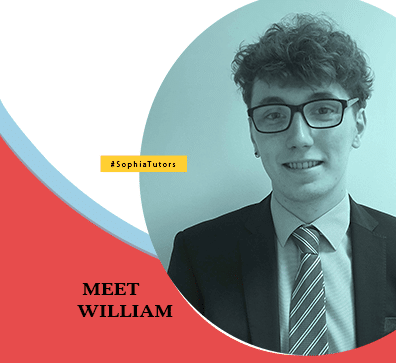 William is a second-year student studying politics, philosophy and economics at Goldsmiths College University of London. Prior to this he was awarded a BTEC Level 3 in business, where he attained grades of Distinction, Distinction and Merit.

William has been actively involved in politics for over five years and has volunteered for the Conservatives and more recently the Liberal Democrats. During his volunteering, he was an officeholder within the local party and regularly campaigned in local, European and national elections, while also helping out in by-election campaigns. Outside of party politics, he has campaigned for Equal Marriage in Northern Ireland and campaigned for a Peoples’ Vote on Brexit.

William would start any new lesson by assessing what level the student is at. He then creates a tailored lesson plan that focuses on the areas they are struggling with most. He would then test their knowledge using fun activities like quizzes, quick-fire rounds and one-to-one discussions to help the learner better understand and retain knowledge of complex political and economic theories; whilst also making it fun at the same time, in order to keep them interested and engaged with the topics.

In his spare time, aside from politics, William is an avid bibliophile and loves expanding his knowledge beyond his specific subject interests. To keep fit he likes jogging and cycling and would often partake in these activities to clear his head. William is a firm believer in life-long learning and, in addition to the above, he loves travelling and experiencing different cultures around the world. He is currently in the process of learning French.