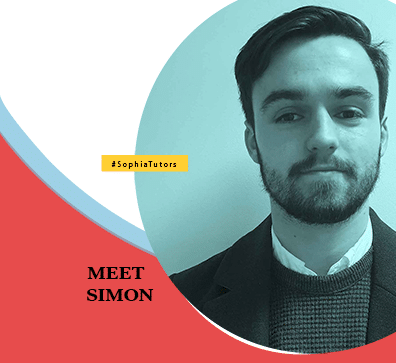 Simon is currently studying for an MA in Applied Linguistics at Birkbeck University of London. He has a BA degree in German from Hull University, which including a year abroad studying at Potsdam University in Germany. Simon also holds a Cambridge CELTA from International House London, which gives him the skills to effectively teach English to students. Simon also went to King’s College Taunton where he has A’Levels in French, German and Design Technology. In July 2019 Simon spent two weeks at the Japanese Summer School’s course hosted and organised by Eton College. Here, he spent the mornings teaching the students English Language and during the afternoons and evenings he took on a more pastoral role in guiding the students around London to various cultural sites/activities. He has also spent time helping his neighbours’ children with their studies as they approached exam time.

Simon wants to ensure that the student gets the help they need through a conversation with the student and parent about the strategies employed by their school and the structure of their curriculum. This will allow him to tailor the lessons to the students preferred learning style. Simon also strives to reduce the amount of tutor talking time, and to increase student talking time and interaction. He achieves this by using Concept Checking Questions to elicit answers or to guide students towards the right answer instead of giving it to them.

Simon likes to keep fit in his free time, which he does mainly by running around the various parks of London, He hopes to one day complete a Marathon. His previous job was as a Bookseller for Waterstones and Hatchards, so he also likes to relax by reading a good book. He also loves to cook, which for him is very relaxing, if he can find the time. Finally, Simon is an avid video gamer, specifically PC.