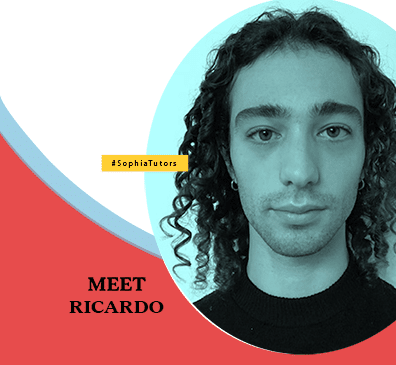 Ricardo has a fine art and history of art degree from Goldsmiths University of London. He also holds a Level 4 cinema and video diploma from Escola Artística António Arroio – a specialised school for art in Lisbon, Portugal. He has represented this school as a jury for IndieLisboa film festival and he has performed for former tutor Oreet Ashery for the Jarman Film Award event at Whitechapel Gallery. Ricardo is prepared to tutor in art, art history and Portuguese.

Ricardo’s approach to tuition has at its basis an understanding of theory and practice as complementary and inherent to each other. He believes that true learning is achieved through testing an idea or subject through different angles. Knowledge not as information, but as a set of skills for how this information can be apprehended, understood and freely used. It is in understanding the various ways in which something can be perceived that one truly learns, naturally a source of great enjoyment! Therefore, tutorials should be tailored to each and every one, so getting to know the student is a crucial step for a mutual agreement on how the lessons should run. He encourages students to allow their chosen subjects to sink into their daily life and to focus on the specific points which seem more relevant and interesting to them, so they will naturally apprehend concepts and ideas which make sense with their understanding of the world. He is a kind, comprehensive and communicative person, currently a Junior Fellow for his BA course, who will be most happy to help with these subjects, which are so meaningful to him.

Ricardo’s free time is usually spent around his interests – art, history, cinema, literature. His art practice is very research based and he is mostly a performance artist. Therefore, he is usually around books, dancing or trying to get back into Taekwondo, for which he was Portugal’s national technique champion in 2009.