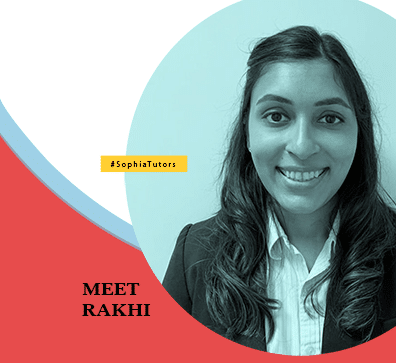 Rakhi studied for an economics degree at the University of York and then went into industry for a few years, but felt unfulfilled with the jobs she was doing. She then returned to school and studied at the University of Warwick for her Professional Certificate in Education. Rakhi is a fully qualified teacher with QTS and has experience in teaching in three different secondary schools over a period of five years, before becoming a full-time professional tutor. Rakhi began her tuition career during her university days, which she believes is what really inspired her to go into teaching in the first place.

As a passionate and experienced educator, Rakhi has a solid foundation of experience in tuition and, as such, her personal approach varies depending on the needs of the student in front of her. She believes it is essential to personalise tuition according to the requirement of the student. Developing knowledge of a concept is usually her starting point, before going on to develop and embed the student’s confidence. Once this is done, she demonstrates differing examination techniques, that will help the student prosper in exams.

Rahki is a huge sports fan. She loves strength training at the gym, playing the odd game of football and netball, as well as watching a variety of sports. She was proud to be a Games Maker for the London 2012 Olympic Games and attended many events held there. She also travelled to Rio De Janeiro for the 2016 Olympic Games and also plans to attend the Olympic Games being held in Tokyo this summer. Further to this, she has also attended the last three commonwealth games in Delhi, Glasgow and the Gold Coast. Travel, sport and a love of learning are an integral part of her life, and to fuel these passions she also enjoys reading; especially autobiographies centred around important people within these areas.