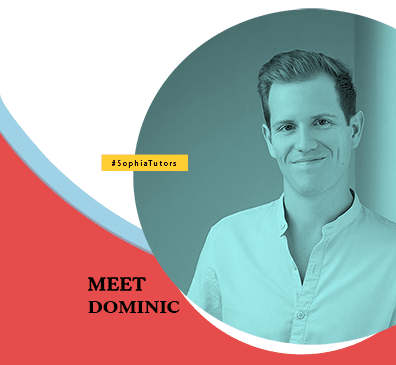 Dominic currently works in Dubai as a Mindfulness Trainer and a teacher. Dominic went to a prestigious school called Hampton and achieved 4As and a B in his A Levels. He then attended a Russell Group University (Nottingham), where he studied Psychology and Philosophy and received a 2:1. Dominic was also awarded a PGCE from Buckingham University (one of the top universities for studying education in the whole of the UK).

Dominic then became a teacher and taught in British Curriculum Schools for eight years in both the UK and Dubai, before moving into Mindfulness training and Tuition full time. He has mainly taught children at Primary School age groups, but he is also able to teach some of his specialist subjects to GCSE and A Level standard (English, Philosophy and Psychology). In his role as a mindfulness coach he has helped entire families overcome their family dynamics; he also has mentored many children to become more productive and caring, and he has held many corporate lectures on the need for mindfulness in this hectic world, across

Dubai. Dominic’s educational style is dynamic and pressure free. He likes children to inquire for themselves into the truth of things and to think independently. He feel that this is the most important aspect of intelligence, which is unfortunately under-appreciated in the modern education system. He is also extremely passionate about self-understanding and holistic learning, which embraces not only the intellect, but also the emotions and spirit. For Dominic, the most important aspects of teaching and learning are freedom and enjoyment.

In his spare time, Dominic mostly enjoys studying and writing. He currently has three non-fiction books in progress which relate to Philosophy of Mind and meditation. He is also writing a fictional series for children, in order to open their minds to the wonders and mysteries of living as a human being in this world. Dominic’s other passions are debating, philosophy and sport. He also plays a lot of golf and piano in his spare time!